Milan is a city of waterways which have been conquered and lost. 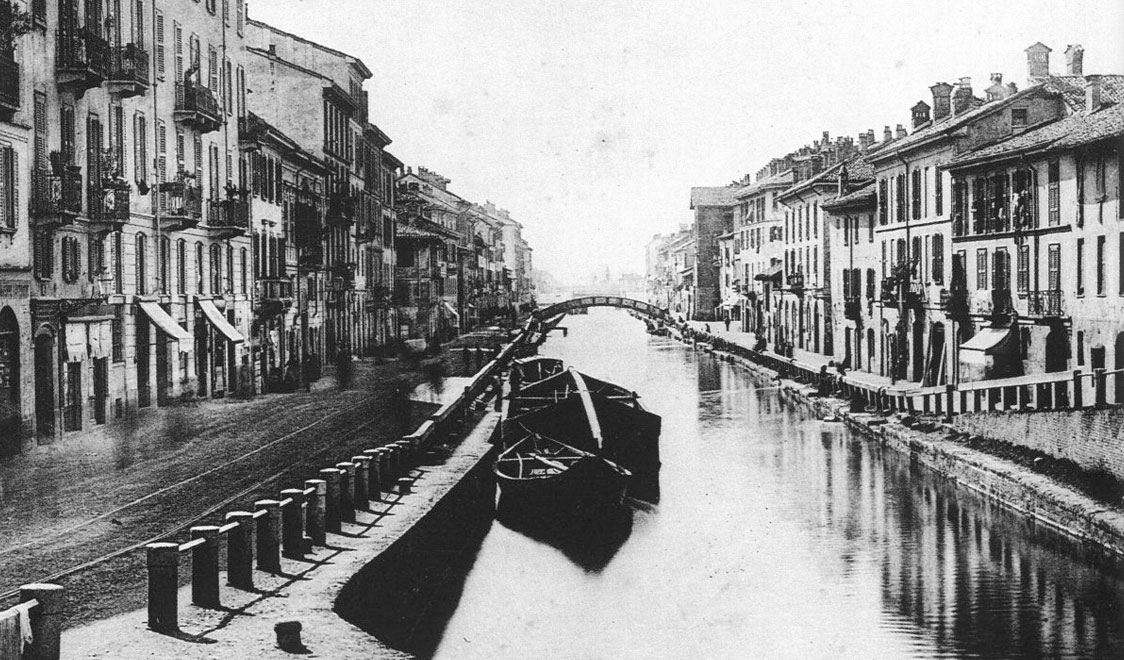 hen Milan had its waterways, it was possible to go boating to Venice via Pavia.
Read on to find out how all of this was hidden underground, with just a few impoverished traces remaining. To this day, some of the underground mysteries of Milan still remain unsolved.

The ancient Insubri people had carefully chosen the location where they would originate Medhelan (or Medhelanion) in the fourth century BC, a new city of water and fortresses which would eventually become Milan.

The location was chosen so well that when the barbarians of Northern Europe flocked to the side of the Alps after cutting down the last rampart, they discovered that the Insubri were occupying some of the most fertile plains in the world, full of food and extraordinary water currents.

Milan stood “in the midst, in many waters”, and the name Mediolanum (as the Romans called it) indicated its intermediate position between the streams.

There are only few impoverished and almost squalid traces left of the ancient glory of Milan’s canals, major waterways that made it possible to sail through the city and directly connected it to the Adriatic Sea through the river port of Pavia.

In Milan, there were also a port and a dock, whose ultimate legacy is still visible in the form of Porta Ticinese.

In modern times, the dock is always dry and covered with waste of all kinds.

Yet it is not hard to imagine it with the boats moored, despite it being perpetually shrouded in a fog of traffic and smog.

In fact, it is easier to imagine the boats there during foggy weather, when the boundaries are fading and there is a strong atmosphere of a city that is no more.

This city has not been destroyed: in reality, the canals are now underground.

The ships are gone, except for on the large canal that springs from the dock of Porta Ticinese.

The boats would arrive in the city of canals transporting coal, timber, marble (used in the construction of the cathedral, among other buildings), hay and even cattle, and would leave carrying local wine, wheat, salt and handicrafts. 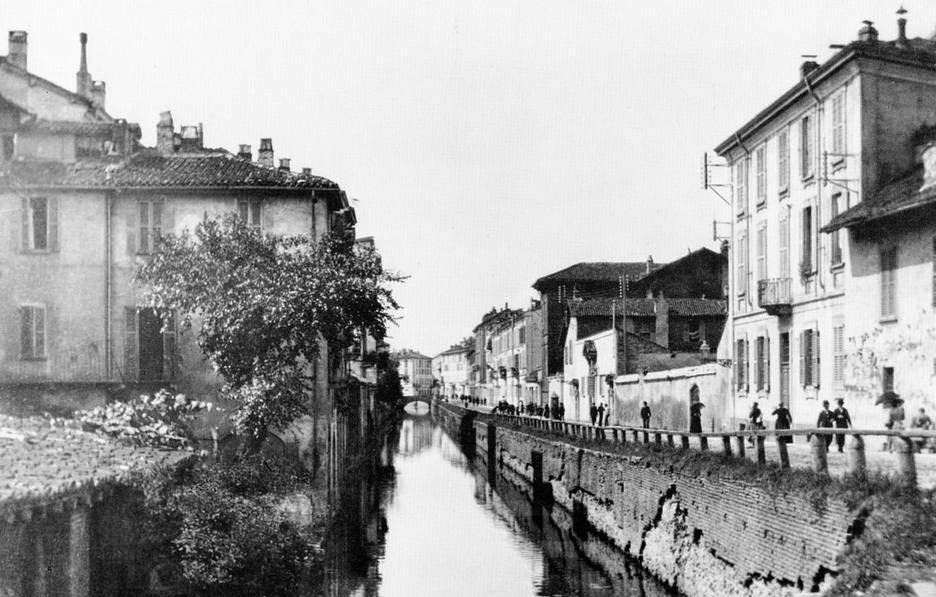 Milan - The Old Canals (Milan, Italy)
In 1929, the ring of canals allowed goods to be delivered directly to the very centre of Milan.

The streets that run parallel to the channels (the towpaths) made it easier to transport the barges that were pulled from the ground, as in the time of Roman ships on the Po.

Then there were the passenger boats, later used as delivery boats, carrying people from Pavia and any other location where there was a channel connected.

And do not forget that before the loss of the waterways, all the Milanese were excellent fishermen!

Intended to reduce the heavy traffic which made the medieval streets clumsy and slow, and required them to undergo constant repairs, the ships have paradoxically influenced the development and planning of a modern city that does not even have a river.

One can still understand the reasoning behind hydraulic locks, equipped so that the boats could enter or leave on different water levels.

A lock working to raise or lower the boats was not a rarity in Milan, even on the eve of the First World War.

However, through a process of urban decay which touched every Italian city, and the preference of the road as a means of faster transportation, they gradually disappeared from the canal’s metropolitan landscape.

Many people would welcome their reintroduction, but the decision to do so would be based more on nostalgia than functionality.

The channels, however, could provide a viable alternative to roads, as is the case in other urban industrial cities of North Europe (for example, in Amsterdam).

Not to mention the increased efficiency in the transport of goods: a one-horsepower ship can carry up to four tons of materials, whereas one equivalent terrestrial vehicle can only transport 150 kg.

It would perhaps be impossible to recover the entire waterway network, as it is now covered by streets and buildings; however, the project could have significant advantages also in terms of tourism, alongside the practical benefits. 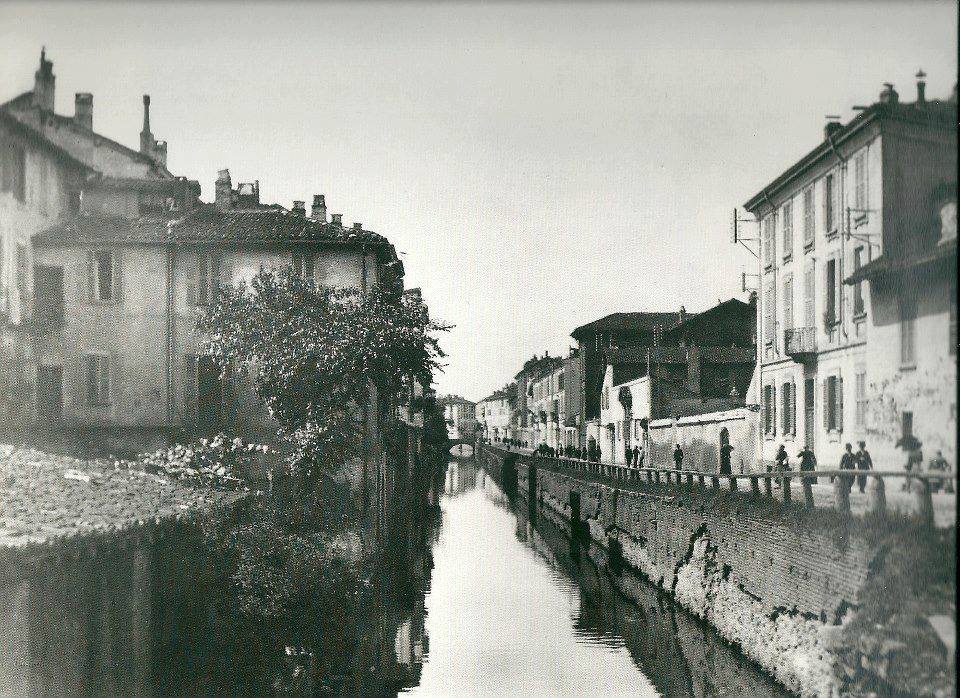 Milan - The Old Canals (Milan, Italy)
With some changes, Milan could regain its image as a magical city of water. Even today, Milan retains that special and unique quality, justifying the feelings of profound nostalgia which pervade the city.

Even the springs of Milan are no more. These ancient pools of water were an outward manifestation of groundwater, which fed into the so-called “rotten” lakes.

These springs are recoverable and could be useful to help preserve the last remnants of urban biodiversity in the city – for example, they could accommodate Italian amphibians which are believed to be on the brink of extinction.

In Milan’s water meadows, the groundwater was close to the surface and maintained temperatures that were consistently above 10 degrees Celsius, allowing plants to grow even in winter.

Those meadows, mentioned by Adriano Celentano in his song “The Boy From Gluck Street” “Il Ragazzo della via Gluck”, were the last remnants of a town which was once green and furrowed by waterways.

The Great Canal was opened in 1269 and could be navigated by boats weighing up to 500 tons.

It was the main artery of the great waterway network of Milan, which often flowed to the covered brick vaults.

If you walk past Ripa di Porta Ticinese and Via Sforza, it is not hard to imagine the area dotted with shops and taverns, standing next to the bustling canals.

But to really go back to those days, we have to go underneath the city: a part of the waterway network remains viable beneath the city streets, at least where they has been reused as part of the sewer system (you have to bear in mind that, at the time, the waterways rivalled the sewers when it came to problems of hygiene and odour).

The channels also had a defensive function, but they were used for another purpose which was less noble.

In the mid-nineteenth century, smuggling in Milan seemed to have been eradicated, but customs officers wondered how it was possible that the traffic volume on the canals remained unchanged, and their duties did not increase.

Thanks to a tip-off, according to Ippolito Ferraio and Gianluca Padovan, the authors of the book “Milan Underground”, the city’s tax collectors slipped under a large stone slab one night in July 1868 and discovered the smugglers, who had continued to use the ships underground, loading them up with items such as meat, alcohol, and poultry.

The rope used to drag the secret boat was found by the side of the channel. 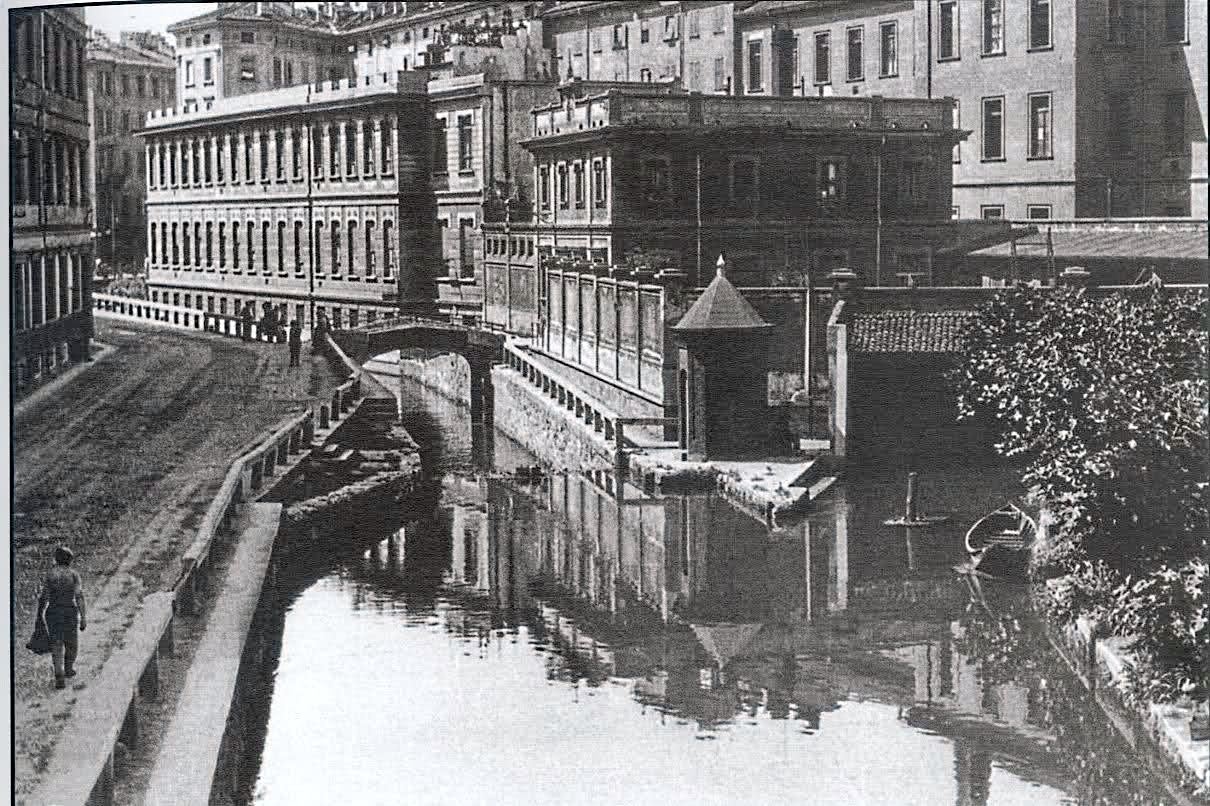