The Royal Palace of Caserta, a significant part of the inestimable historical and cultural heritage of our wonderful country, is a historic mansion which was once home to the royal Bourbons of Naples. It has been given the status of an official World Heritage Site.

ocated in the town of Caserta, the palace was strongly supported by Charles of Bourbon, the King of Naples from 1759 to 1788. He was eager to create a worthy government office to represent Naples and his kingdom, one that would bear favourable comparison with Versailles.

The choice of Caserta was not random, but was born from the king’s love for the fascinating landscape of Caserta and the strategic need to make the royal palace less vulnerable than it would be in Naples, where it could be subject to attacks by African sea pirates.

In terms of volume, the palace of Caserta is the largest royal residence in the world, covering over 2 million cubic meters

The huge project was given by the king to the architect Luigi Vanvitelli; the work lasted for several years and some details were left unfinished. In fact, in 1759, Charles of Bourbon of Naples came to the throne of Spain (as Charles III) and left Naples for Madrid, so the royal palace lacks the dome and corner towers which were initially planned.

Visiting the palace is like taking a trip back in time. You will be struck by a sense of wonder when you see this unique architectural, decorative structure surrounded by a landscape which at the time was the glory of the Bourbon kingdom.

Take a full day to visit the palace, perhaps organising a picnic to eat in the shade of the trees of the park. This way you will be sure not to miss too many things. (However, don’t expect to be able to see everything in one visit…this would be impossible!) 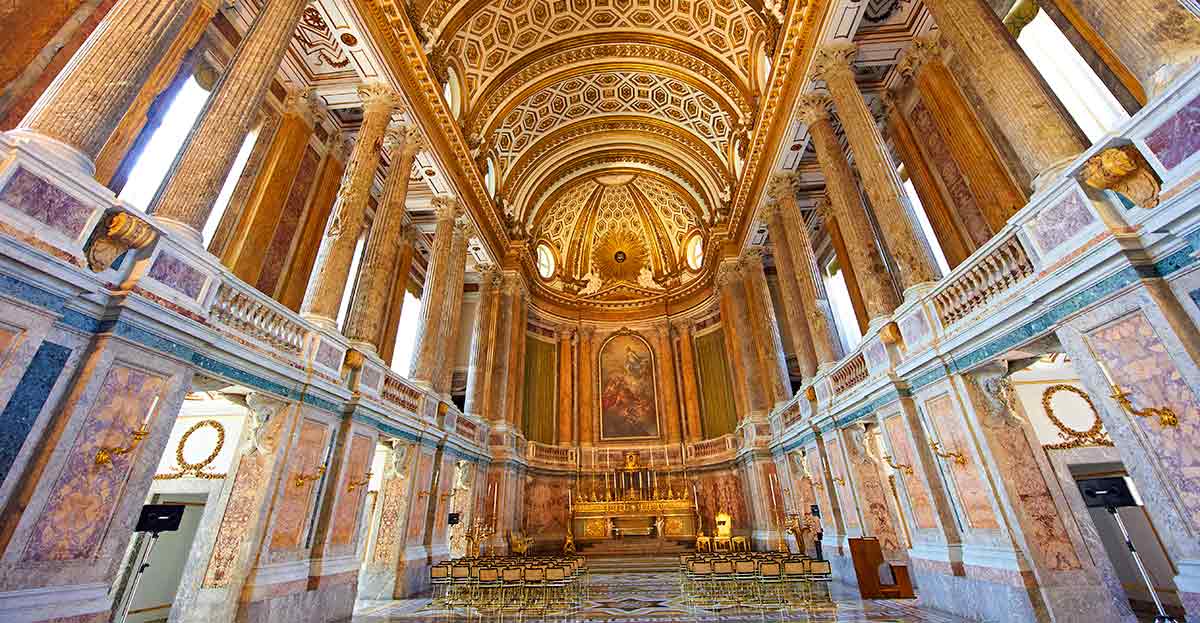 Caserta - Inside Caserta Palace (Naples, Italy)
The park of the Caserta Royal Palace extends for 3 kilometers from South to North, covering about 120 hectares. At the centre of the rear facade of the building, two long parallel avenues branch off.

Interposed along these avenues is a series of beautiful fountains (which also offer a great resting spot for visitors who need a break from the fatigue of walking the long distances), including the extraordinary fountain of Diana and Attenone. This is dominated by the Great Waterfall which starts from the northern edge of the Italian Garden, linking this to the English garden.

Upon entering the building one is stunned by the size; everything is great, and everything is huge. And if we modern travellers, who are accustomed to the skyscrapers and the huge buildings of our civilization, are impressed, imagine how you would have felt a few centuries ago.

The staircase comes to a huge hall, in the centre of the whole complex. From here, you enter the Palatine Chapel (where one can only look in) and to the royal apartments. Don’t worry – you cannot miss it. Just follow the signs and they will guide you along the way. These start from the huge reception rooms and will get you to the private ones, which although small, offer modern and comfortable four-star services.

There is much to see and so much history to learn here. If you want to get the most out of your visit, it is necessary to prepare and obtain a guide book, or rely on one of the guides who are available to lead group tours around the palace. They are not only trained in art history, but also very speedy and will get you around the historic site quickly.