Venice is undoubtedly one of the world’s most romantic cities. You can enjoy being serenaded by a gondolier as you drift along the canals, sipping a cool drink at one of the many outdoor cafes in Piazza San Marco, or splashing out on some beautiful Murano glassware. 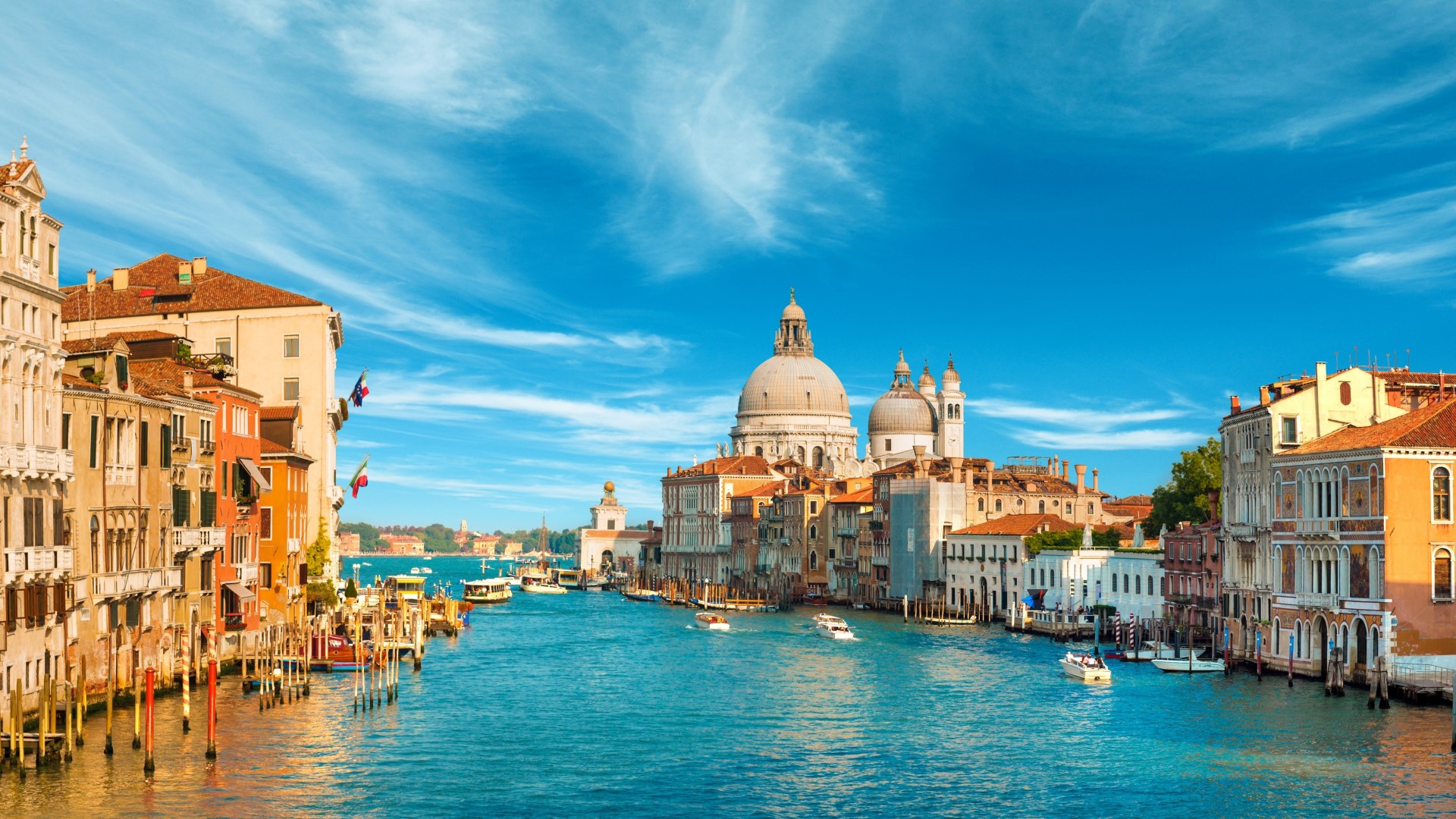 owever, all of these things can end up costing you a lot of money. With a little planning and research, you can have a fantastic time in La Serenissima (the Most Serene Republic, as Venice was once known) without breaking the bank.

The amazing Byzantine structure of St. Mark’s Basilica forms the centrepiece of Piazza San Marco and indeed of Venice itself. It was constructed in the 13th century, Basilica San Marco and today it serves as a memento of the time when Venice was a maritime connection between the West and the East. The church used to exclusively belong to the city rules, called doges, but in the 1800s it became open to the public. The stunning interior is decorated with elaborate mosaics, making this one of the most breathtaking sights in the city. However, be prepared to queue; visitors have to wait for 45 minutes on average to get their chance to enter. If you don’t want to have to wait in line, you can book your visit online from April to October for a cost of around $3. Entry to the basilica is free, but there are a few small museums inside which charge entry fees.

According to Napoleon, Piazza San Marco is “Europe’s drawing room”, and sometimes it actually does seem as if the majority of the people on the continent are gathering in the bustling square – not to mention all the pigeons. If you want to avoid the biggest throngs, try visiting later on in the evening or very early in the morning. The outdoor cafes do look inviting, but you are likely to be charged just for the privilege of sitting there. To save money, take in the sights of the square before the crowds arrive, like the imposing clock tower and the impressive Doge’s Palace, then head somewhere else. 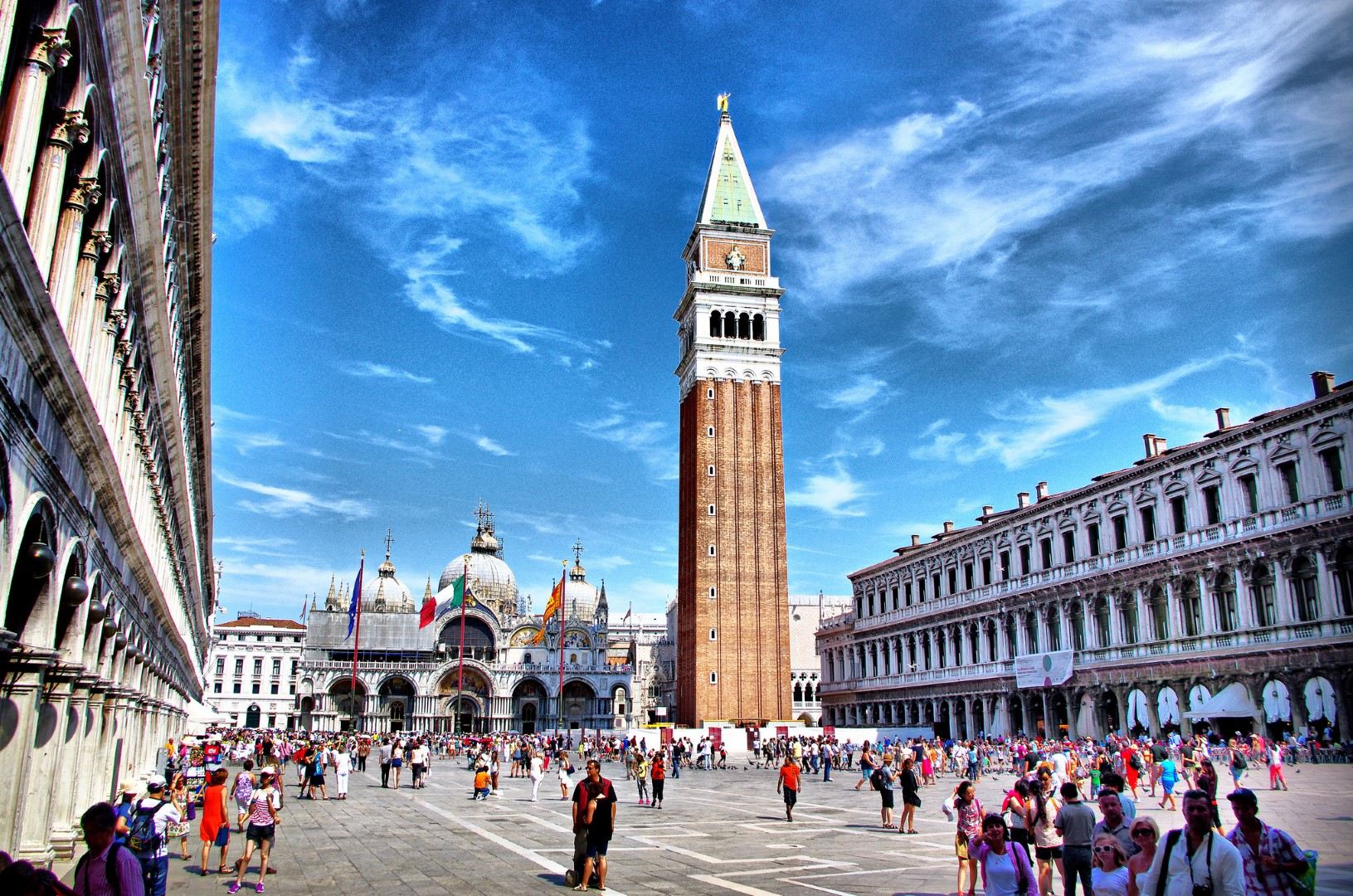 Venice - Piazza San Marco (Venice, Italy) 45° 43' 41.668" N - 12° 33' 62.83" E
The Grand Canal features four bridges, but of these the most famous is the Rialto Bridge, which was completed in the 16th century and spans the canal’s narrowest point. Michelangelo was among the designers and artists who competed to design the bridge, but the contest was won by Antonio da Ponte, a municipal architect who conceived the distinctive and graceful stone arch we see today. Pay a visit to the bridge to see the gondolas sail by, or take a look at the interesting souvenir stores which will the arcades on each side of the bridge.

Depending on how long you are staying and what you wish to see, the Venice Card could save you a significant amount of money. The card is valid for seven days and prices start at about $41 for visitors aged 6 to 29. For those aged 30 and over, prices start at $54. Card holders can enjoy a range of great benefits, such as free entry to the Doge’s Palace along with ten other places of interest. These include Ca’ Pesaro, a magnificent baroque palace located on the Grand Canal, which was designed by famous architect Baldassarre Longhena. It contains many fascinating examples of modern art which were acquired during the first few years of the Venice Biennale. Highlights include sculptures by Medardo Rosso and Auguste Rodin, and the stunning “Judith II (Salome)” by Gustav Klimt. 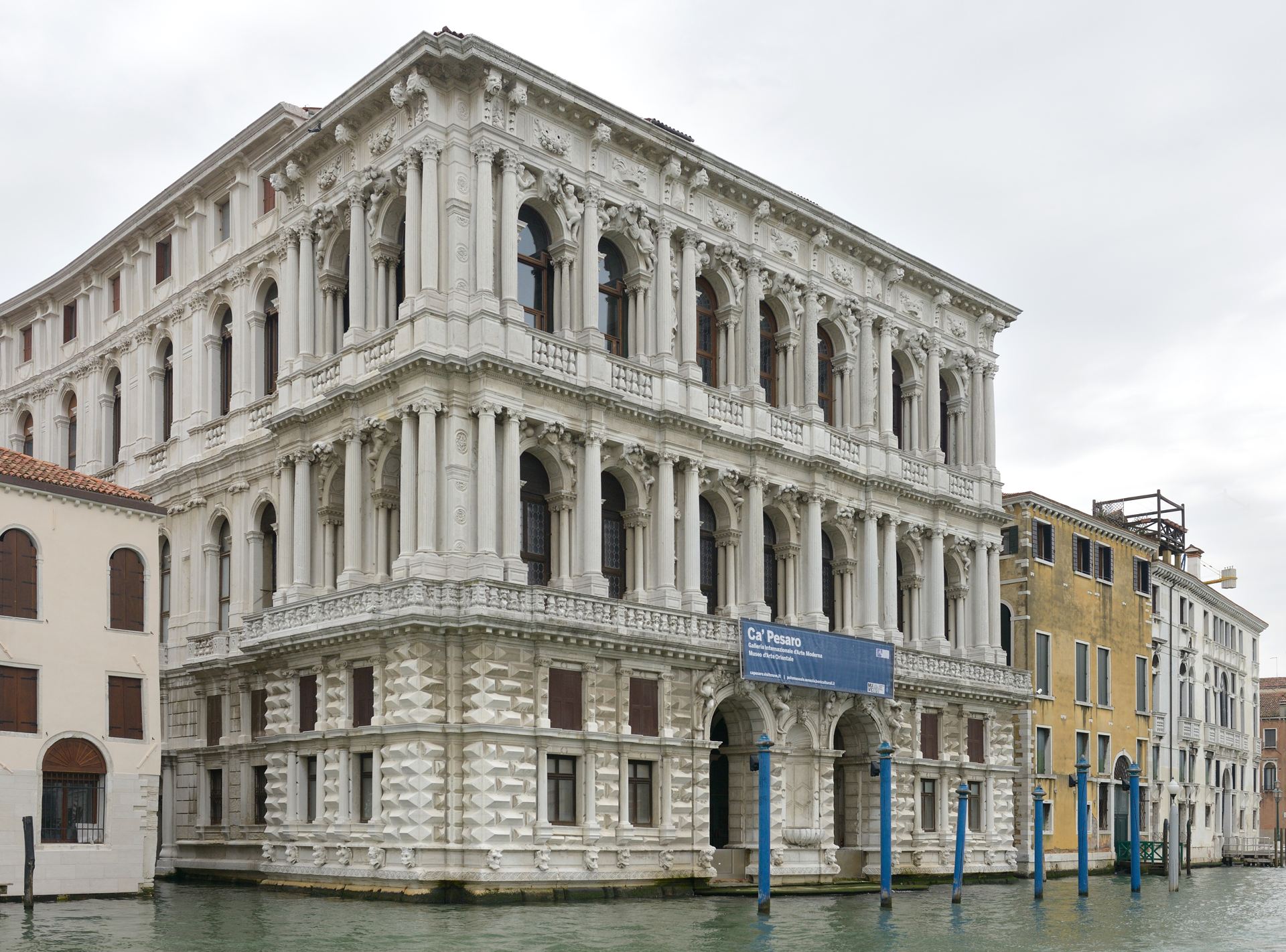 Venice - Murano Glass Museum (Venice, Italy) 45° 43' 63.568" N - 12° 33' 00.607" E
The San Marco Pack offers an abridged version of the Venice Card, and costs about $34 for everyone over the age of 6. It includes entry to the National Archaeological Museum, Museo Correr, the Monumental Rooms of the Biblioteca Marciana, the Doge’s Palace, and three chorus churches which you can choose. 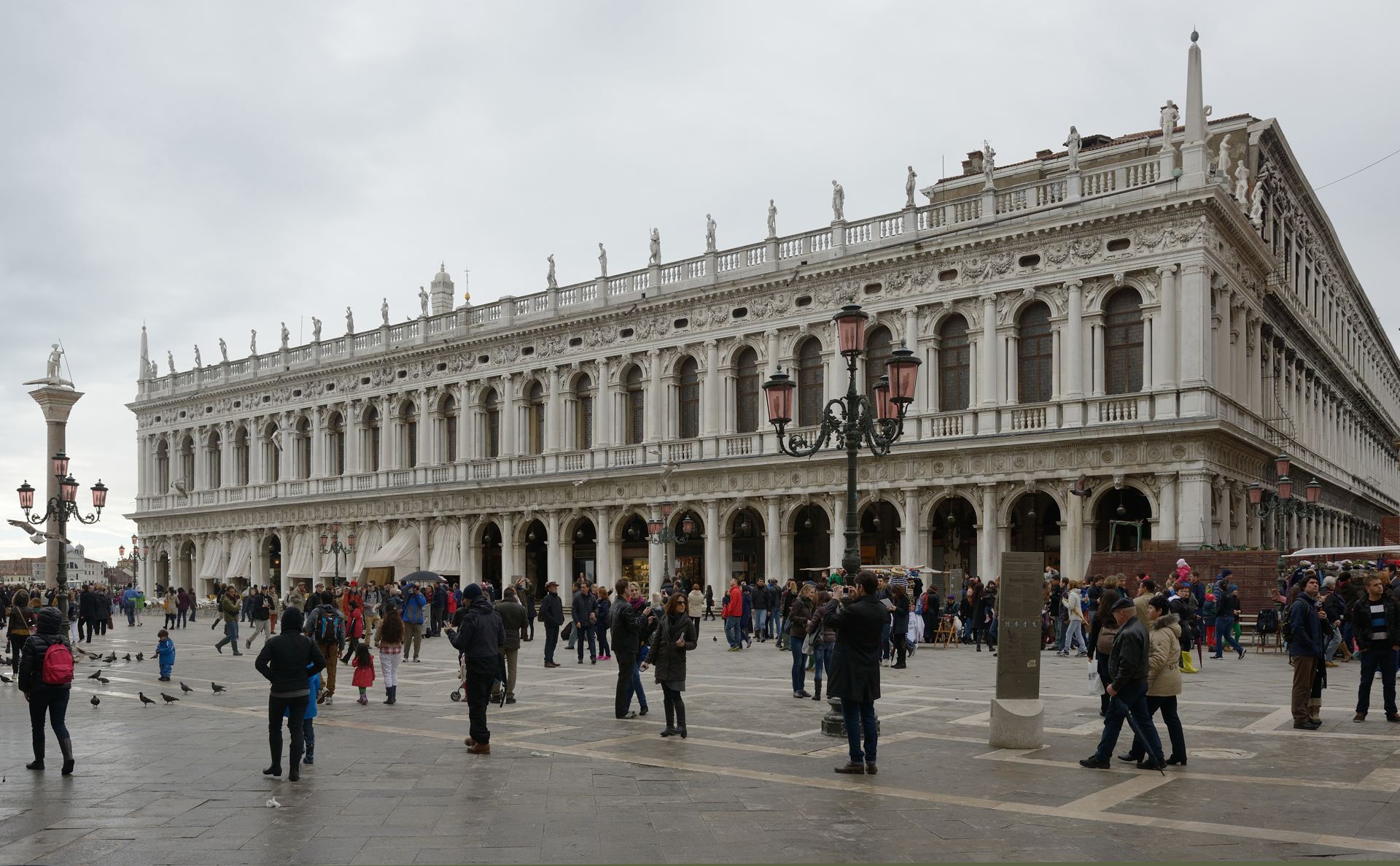 Venice - Biblioteca Marciana (Venice, Italy) 45° 43' 33.365" N - 12° 33' 72.1" E
Music lovers will want to pay a visit to the free Music Museum, which is focused on liuteria, the creation of musical instruments. It features exhibits on the life of famous Venetian composer Antonio Vivaldi and on the art of violin making, among many others. The museum is open every day from 10am until 7pm. 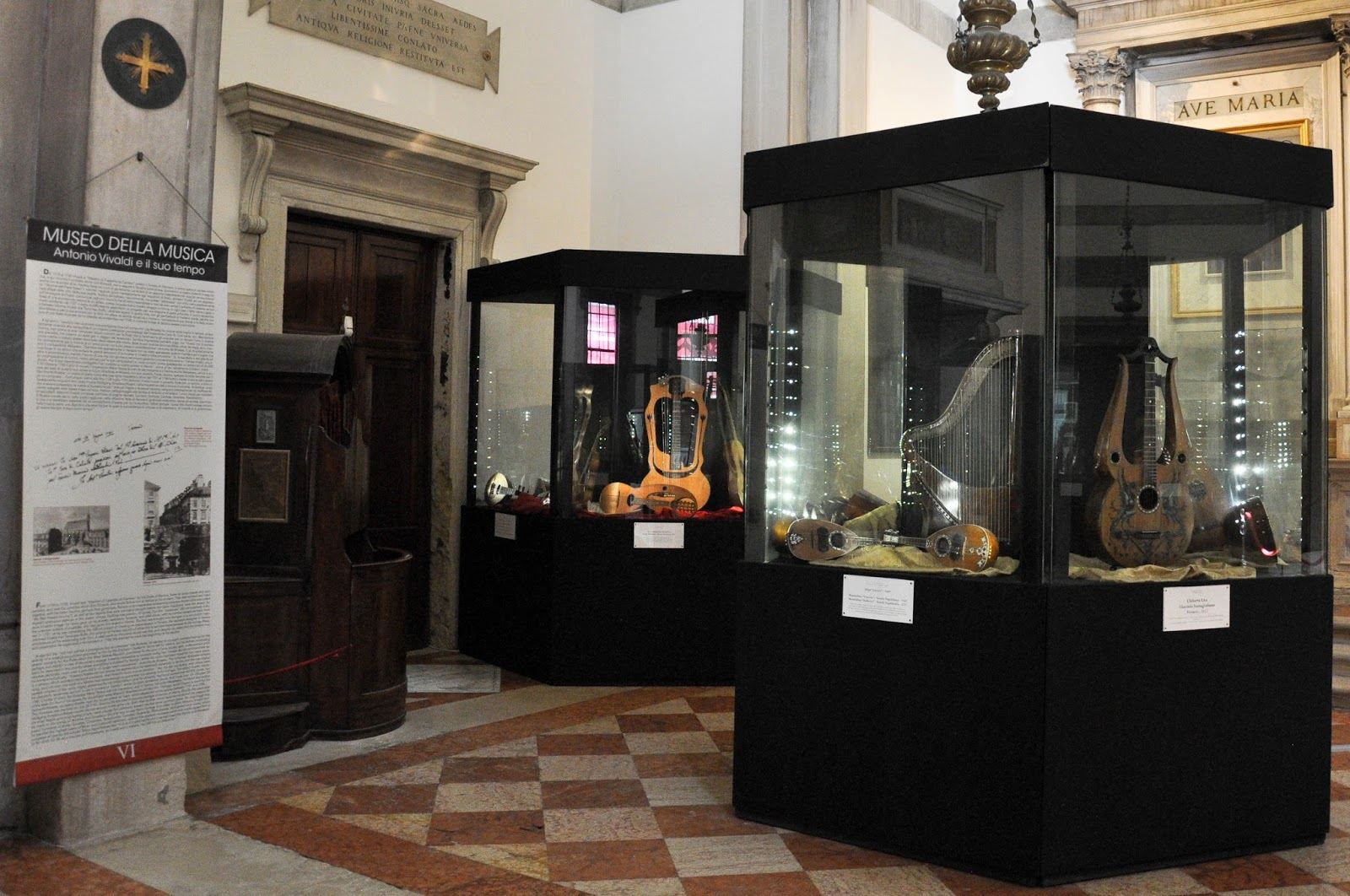 Venice - Music Museum (Venice, Italy) 45° 43' 07.92" N - 12° 32' 93.85" E
The distinctive octagonal form of the 17th century Basilica Santa Maria Della Salute is a sheer masterpiece of baroque architecture. It was designed by Longhena and constructed by plague survivors, in gratitude to the Virgin Mary for sparing their lives. It is the home of several major 16th century artworks by the renowned Venetian painter Titian, including a ceiling painting depicting David and Goliath. Another painting by Venetian artist Palma il Giovane depicts Jonah emerging from a whale’s mouth. This is thought to symbolise the city surviving the plague.

Celebrities in Venice
The Planetarium on the Lido was founded by passionate amateur astronomers. It offers free shows every Sunday afternoon from October to May at 4pm, perfect for budding stargazers aged six and over. There are only 60 seats available, so be sure to show up early. 11 veneziaLittle artists will enjoy Kids Day at the Peggy Guggenheim Collection, which takes place every Sunday afternoon from 3pm to 4.30pm. The free workshops provide children with an introduction to the artworks at the museum by getting them to experiment with different techniques. The program is conducted in Italian, but depending on the group’s nationality, English instruction may be available. The Venice Lido, a long stretch of sandbar, is a great setting for a family day out. There are several free beaches, including Blue Moon beach and Alberoni Beach, which is a seabird sanctuary protected by the World Wildlife Federation.

Get up early to visit the Rialto fish market before opening time and you will be rewarded with the sight of the fishmongers collecting their fresh stock from the barges on the canal. Linger a little longer on Fridays and Saturdays to marvel at the huge array of seafood, and to mingle with local shoppers and chefs choosing their fish for the weekend. The market is open from 7.30am to 1.30pm, Tuesdays to Saturdays, but is closed on Sundays. During happy hours at lunchtime and in the evenings, Venetians flock to small bars called bacari. These standing-room-only spots offer a selection of cicchetti, snacks to accompany your ombra (house wine) or spritz (a glass of prosecco with Aperol or Campari). Typical nibbles might consist of something like crostini topped with slices of mortadella or whipped salt cod. Snacks and drinks at a bacari may only cost a euro or two. We recommend the charming Cantinone gia Schiavi in Dorsodoru, located just across from one of the last remaining gondola workshops.

Venice consists of 118 islands punctuated with 175 canals and connected by over 400 bridges. Vaporetti, or water buses, are a great way to get around, but they can be expensive, particularly if you purchase your ticket onboard, where prices can be around $10. If you want to save money while exploring the city, you may want to consider getting the ACTV, a tourist travel card which gives you unlimited travel for varying periods of time. A 12 hour card will cost $25, while a seven day card costs $68. Young people aged between 14 and 29 can buy a three-day Rolling Venice Card, which costs around $27. Gondola rides can be very expensive, but the traghetti (large ferries) offer a no-frills travel alternative for a much smaller cost. There are seven different crossing points over the Grand Canal, including ones near the Rialto market and the Salute Church. For non-Venetians, tickets are less than $3, giving you the chance to get out onto the water without having to splash out a lot of money. Simply wandering through the labyrinthine streets is a great way to immerse yourself in an authentic Venetian experience. Don’t worry about getting lost; Venice is surrounded by a lagoon, so you won’t be able to wander too far. If you want to get your bearings at any point, there are plenty of signs and arrows to point you towards the bigger attractions like San Marco or the Rialto.