Spend a day immersed in the art and history of some of the favourite spots of eighteenth-century Venetian nobility. Sailing along the Brenta aboard an old skiff, you will be able to enjoy some of the finest Palladian Villas overlooking the bank of the river.

trip like this will give you a real taste of the past. In the past, Venetian nobles would navigate along the Riviera del Brenta on board boats, travelling from the city to their country villas. Today, as then, you can relive that magical atmosphere during a slow trip down the river, admiring the architectural magnificence of the dwellings which have embellished these shores since the eighteenth century.

This is one of the most beautiful river routes of the Peninsula, and from March to October is the best time to travel down it and spend a day imagining the splendour of that era, including its art, history and nature. We begin by setting sail from “Portello di Padova” Padua, the old river port of the city, where you begin to navigate along the Piovego canal along ancient sixteenth century walls and bastions, surrounded by beautiful vegetation.

At the edge of Noventa Padovana, you will see the first of the noble Villas: the solitary Villa Giovanelli, an example of “villa temple” built in the late seventeenth century, which is accessed by a pentagonal porch and a grand staircase adorned with statues which make a great visual impact. After passing by here, you will reach Stra, location of the sumptuous Villa Pisani, built by the prestigious Pisani family. The villa is adorned with many decorations, from the sculptures that adorn the exterior facade to the interior rooms, painted by the most famous artists of Veneto in the 1700s. 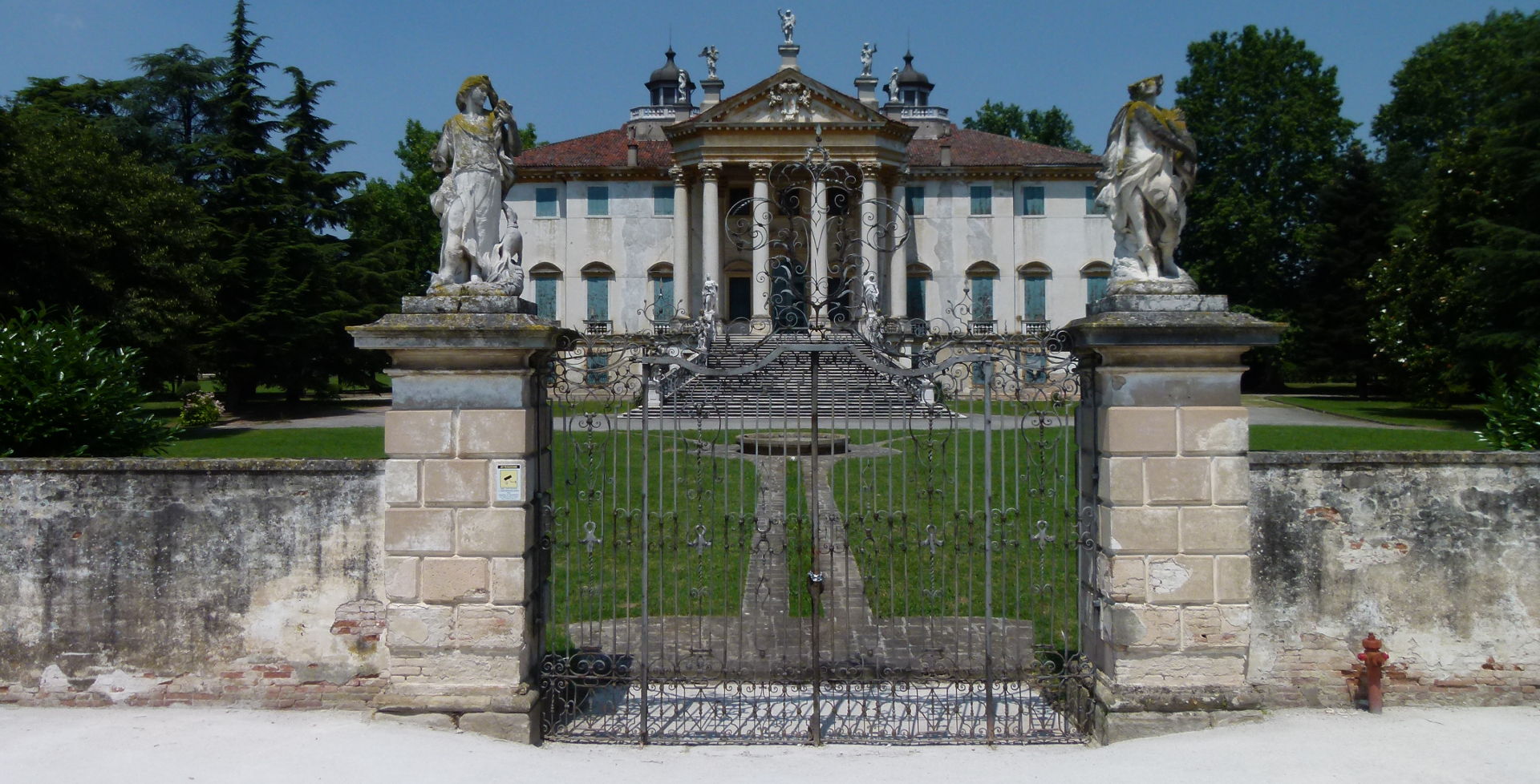 Venice - Villa Giovanelli (Venice, Italy) 45° 42' 66.13" N - 12° 06' 71.582" E
One of the most important of these rooms is the spectacular dance hall, whose ceiling was decorated by Giovanbattista Tiepolo to celebrate the glory of the Pisanis. The villa is surrounded by a magnificent park where, in the shade of trees, are the stables, the lemon grove, the coffee house and the labyrinth, which was the setting for the love games depicted in Gabriele D’Annunzio’s famous novel The Fire. From Stra to Mira, overlooking the canal, there are another thirty villas that can be seen only from a distance because they are largely still inhabited. However, from the water you can observe Villa Soranzo, and villa dei Lazzara Pisani, which is also called “la Barbariga”; this villa is well known for its architecture, its huge park which is often used for hare hunting, and the sumptuous banquets attended by the nobles of the surroundings.

You will also see Palace Foscarini, which was inhabited by Lord Byron between 1817 and 1818, and Villa Contarini, famous for the historic 22-course banquet prepared there in honour of Henry III King of France. Continuing on, you will reach Dolo, an ancient village in the Venetian style, famous for its mills, the ”Squero” (an old covered slipway used for sheltering boats), and the ancient Conca, who can be seen in many works of famous painters including Bernardo Bellotto, Canaletto and Francesco Guardi. After passing on further, you will get to Mira, where there is the highest concentration of villas.

Venice - Palace Foscarini (Venice, Italy) 45° 43' 40.355" N - 12° 33' 02.783" E
Among the verdant greenery and weeping willows that border the canal water is the Villa Barchessa Valmarana, characterised by a large colonnade overlooking the garden. Later, you will see Villa Widmann, a real jewel of the Riviera del Brenta. This was the typical summer residence of the 1700s, and is surrounded by a large park. It was inhabited by an important family of German origin, who settled in Venice at the end of the 1500s. The Villa has undergone various changes over time and has undergone several style overhauls. The refined interior rooms are decorated with various frescoes including the Glory of The Widmann Family, attributed to Guarana, and The Rape of Helen in the magnificent ballroom.

There is also , a delightful place which was the scene of many long and sumptuous receptions that, it wa6 Ville-del-Brentas said, would last up to eight days. You will then reach Oriago, the ancient setting of endless wars between Padua and Venice, and home of an ancient border called “Il Termine” litterally The End, which marked the boundary between the two regions. Passing this, you will get to Villa Foscari, also known as La Malcontenta, one of the masterpieces of the genius architect Andrea Palladio and considered a World Heritage Site since 1994. 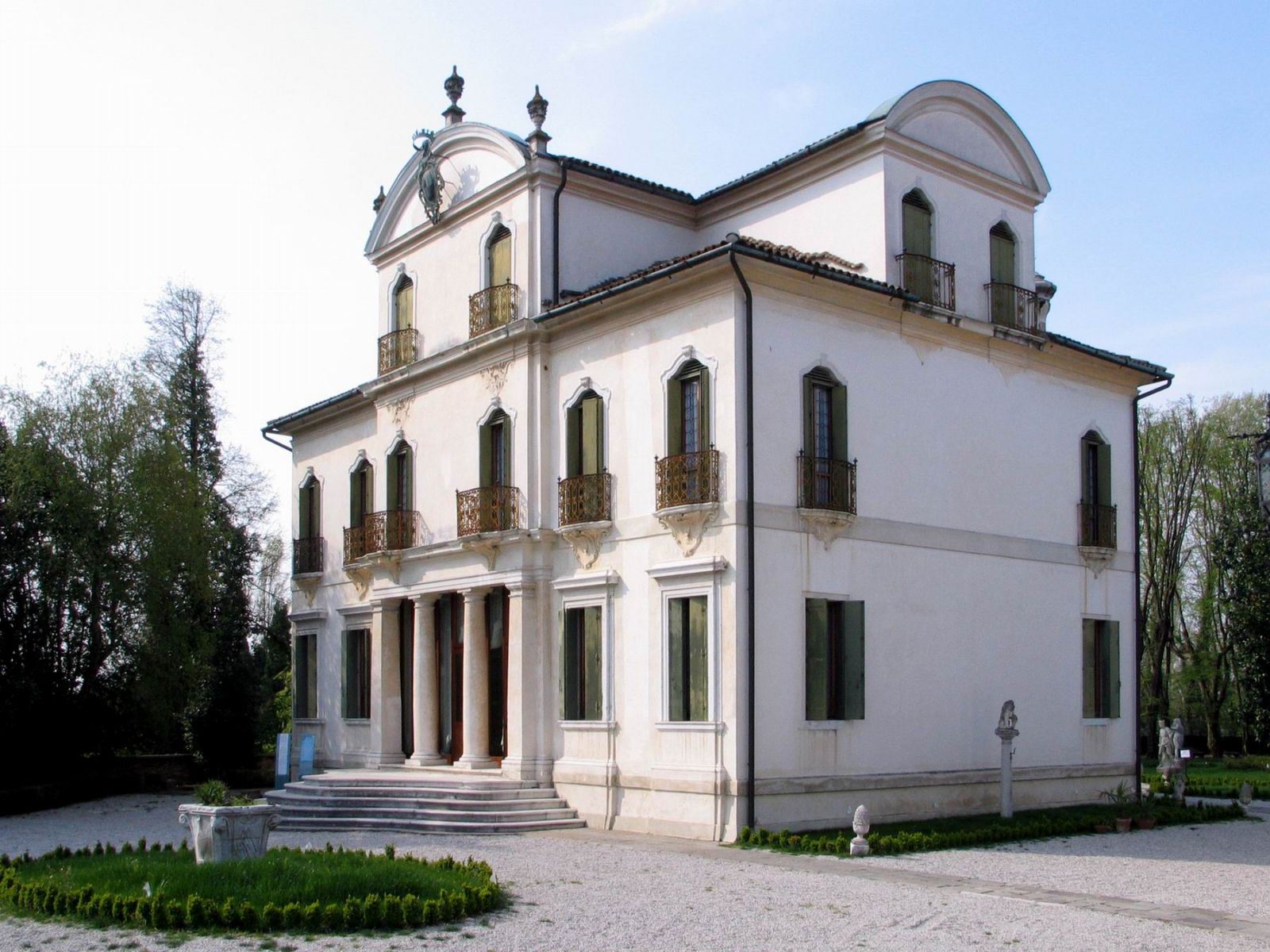 Venice - Villa Widmann (Venice, Italy) 45° 48' 58.367" N - 12° 05' 17.283" E
It a typical example of the villa temple, with an impressive portico including six columns and majestic ramps that created a kind of ceremonial entrance for visiting guests. The sober exterior contrasts with the decorations of the halls, with artworks mainly depicting mythological characters. According to legend, the villa acquired the name “La Malcontenta” because the wife of a Foscari was confined here in solitude due to an infidelity. From here, the navigation continues slowly towards the lagoon, until you reach the splendour of St. Mark’s Basin.

Now you are in Venice !